GA includes flying as diverse as a weekend visit back home and overnight package delivery; as different as emergency medical evacuation and a morning sightseeing flight in a balloon; as complementary as aerial application to keep crops healthy and helicopter traffic reports to keep drivers informed of rush-hour delays.

There are many similarities between how people use their automobiles and how GA pilots use their small aircraft. So if you know anything about how America’s roads and highways work, then you’re well on your way to understanding America’s air transportation system.

Like the family automobile, the family airplane (owned or rented) can provide mobility and pleasure, and it’s almost always a more enjoyable trip by air (after all, every route up there is scenic!). In fact, you might be surprised by just how similar your car is to an airplane.

The family airplane can triple the comfortable range of vacation travel while avoiding the stress and frustrations of heavy traffic. And, of course, the family breadwinners can use the same airplane to great advantage in business by virtue of its speed and flexibility. A common misconception leads some to think of personal or small business aircraft as only for the extremely wealthy. In fact, many people of middle-class means fly airplanes less costly to acquire than a new family car.

More and more people are discovering that general aviation is fast, efficient, and safe, opening a whole new vista of travel opportunities. For both business and personal travel, general aviation means going where you want to go (not just where the airlines go), when you want to go (free from airline schedules), and in whatever degree of privacy you desire. The payoff is greater transportation flexibility and productivity than any other mode of travel can provide.

An estimated 65 percent of GA flights are conducted for business and public services that need transportation more flexible than the airlines can offer. That flexibility can be a hometown businessman flying his own small airplane to see four clients on a one-day, 700-mile circuit, or it can be a CEO and five staff members working at 30,000 feet while en route to a major meeting.
Learning to fly general aviation aircraft is well within the capabilities of the average person, intellectually and physically. Even some disabilities—deafness, for instance—need not keep a person who really wants to fly out of the cockpit. And general aviation has an excellent safety record. More than 90 percent of the roughly 240,000 civil aircraft registered in the United States are GA aircraft.

I started my very first flying lessons at Fairoaks airport in 1996, a small operational general aviation airport by the A319 between Chobham and Ottershaw in Surrey, England. It is 2 NM (3.7 km; 2.3 mi) north of the major town of Woking and for passengers is 2.8 miles (4.5 km) from Junction 11 of the M25 motorway which is between the M3 and A3 junctions. The flying club at the time was run by the operator of the field. The unfriendliness and not welcoming atmosphere made it very difficult for me to progress seriously in my training. 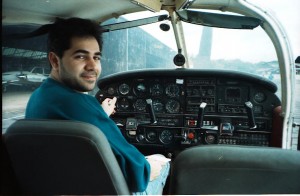 After three months of training and building up 11 hours of flying, I did my first solo flight but this was really a slow process. The cost was too high compared to other flying schools in the country and due to high demand (being very close to London) it was almost impossible to book my flight with one instructor. Of course flying with different instructors can be also a benefit as each teaches you different tricks but at the same time since there was not a proper progress report (except my logbook) it was hard for the instructors to pick up from where we left in previous session. After a year of struggle and not having a serious progress (It is not too difficult to get your licence in a few months), I decided to change the school and looked for different schools around the country. A very good friend of mine, introduced me to Norfolk flying club at Norwich airport.

I was making weekend trips to Norwich and was staying at Stakis Hotel (Now Hilton)  next to the airport and flying during weekend. The club was run by Darren a very nice and friendly guy and his girlfriend. The atmosphere was excellent and what I really wanted. Before I knew, I started taking my written exams and took my flight tests. I did my cross country flight test which you would do solo between three airport in summer 1997. I flew from Norwich airport to Duxford airfield and from there to Petersbrough and back to Norwich. It was an excellent experience which I never forget.

After obtaining my Private Pilot Licence (PPL) in the UK, I continued my training in the sunny Florida. I was lucky to find an excellent flying club run by another British couple in Florida, where I could obtain my IMC, IR and Night flight rating. Britannia Flight Centre was run by Margaret and Eric Shipley in Winter Haven near Orlando. I truly enjoyed flying in their club. Unfortunately the club was closed in 2002 due to stricter rules after September 11, 2001. I wish them both best wherever they are.